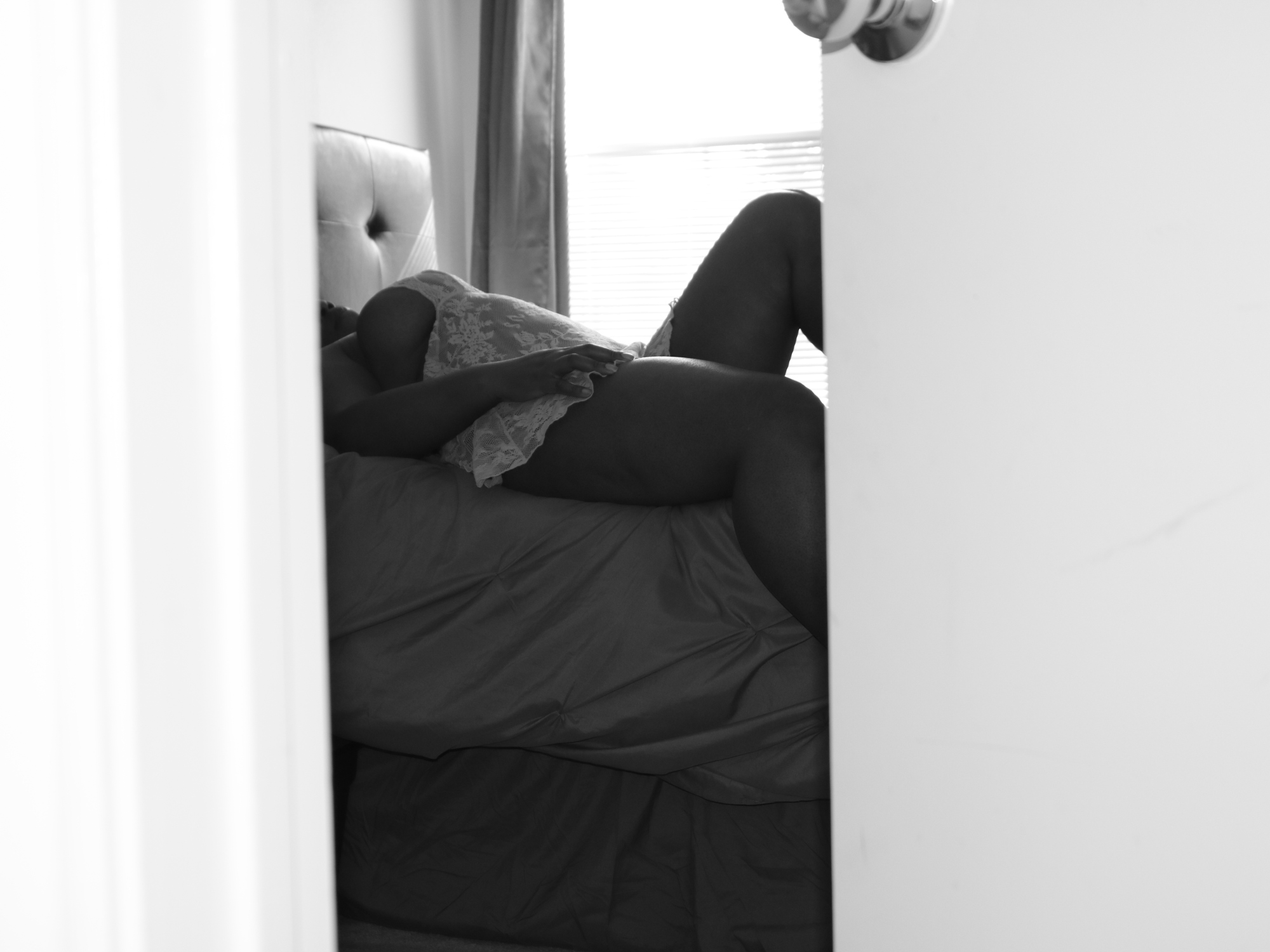 I meet with Owen sporadically. He is Mr. Incognito. Owen has no set schedule, he will just pop up in my email inbox randomly one day with the date, time, location and room number of where to meet him. Of course, that email is always followed up with a very generous deposit to my cashapp!

I received an email a week ago to meet Owen at this very chic boutique hotel downtown today. A little note about Owen. He’s not only Mr. Incognito in conversation but also in real life as well. I don’t really know what Owen looks like. He sent me a couple of hazy photos but I couldn’t make out much.

Owen likes it that he’s totally anonymous to me. In his emails I also receive very specific instructions on how I should wait for him. Today, I am to wear a shear dressing gown, thigh high stockings, six inch black stiletto heels and a blindfold. Always a blind fold. The blind fold is how Owen has stayed anonymous to me. Also in his instructions, I am to be lying at the edge of the bed, my feet at the edge so that my thighs are open an ready for him. Another little note about Owen, he’s never actually fucked me. He loves to dive into the depths of my sweet pussy with his tongue but he’s never given me the pleasure of his cock after.

I’m waiting on the bed as instructed when I hear the locks turn on the door. My breath catches a little as I hear the door knob turn. It’s always so exciting knowing I won’t get to see the man that will spend the next hour pleasuring me!

My body tingles as I hear him come in, his footsteps stopping close to the bed. His hand traces along my body as he moves along the side of the bed until he gets to my blindfold. He makes sure is on securely before he adds another that he’s brought with him. This, as well, is another thing Owen does. Two blindfolds in place, I gasp as he ties my hands with the silk scarves he’s also brought with him and ties those very tightly to the headboard. He says he doesn’t want me pulling the blindfolds off.

This time, Owen also adds a ball gag to my mouth. This is new.

I hear him moving around the room for a moment before I hear his clothes begin the rustle and then his weight on the bed. He starts with my breasts, taking one nipple into his warm mouth and then the other. He alternates between sucking and massaging them. Sucking and nibbling until I am gasping for breath, the ball gag making it impossible for me to beg for him to stop.

My back arches as he continues his torturous pleasure on my heaving breasts, my nipples rock hard and my pussy dripping. He doesn’t stop until I give a muffled cry of orgasm. My breaths are ragged around the ball gag, my hands are numb from gripping the silk wrap, my breasts heaving as I feel him shift his weight until he is on the floor between my thighs. I don’t think I can take anymore when his tongue touches my clit and instantly sends me into orgasm.

He’s teased me for so long that’s all I needed for my whole body to seize into a hard, deep orgasm. His tongue is unrelenting. He sucks and licks my clit, the orgasms washing over me like tidal waves. My back is bowed so hard that it pulls the silk scarves wrapped around my wrists to their limits. I now know what he’s tied them so tightly and put the ball gag in. He wanted to make sure I couldn’t run from him or to be able to cry out for him to stop. Clever, clever Owen!

Wave after wave of orgasm roll through me until I’m so weak all I can do is lie there. Only then does he stop. His lips leave my clit and find my thighs, kissing them as they continue to shake from the pleasure his tongue has given me. He kisses me all the way down to my toes and then his lips are gone.

I’m still gasping for breath when I hear the sound of his belt buckle being undone, the sound of his pants unzipping and then hitting the floor. A moment later the weight of him is back on the bed and he is straddling me, his heavy cock between my still heaving tits. I feel oil being poured right before I feel his hands massaging it in, making me slippery for him.

He rolls over gasping for air, one hand still one of my tits, his fingers working my nipple. Is he getting me ready for round two? Will he fuck me this time?

Nope. Owen gives my nipple one last hard suck before he climbs off the bed and pads into the bathroom. I hear the shower come on as I lie still tied to the bed, ball gag firmly in my mouth.

The sound of the shower turning off shakes me from the nap I was slipping into. I hear Owen come back into the room and again the rustle of his clothes as he redresses. He again moves around the room and then back the bed where I wait. His hands trace the length of my body as he moves to untie my hands and then removes the ball gag. My wrists are a little numb and my jaw is sore from having the gag in so long.

Before I can sit up on the bed, I hear the click of the door and know that Owen is gone. I fall back and take the blindfolds off, giving myself a minute before I open my eyes to the light in the room.

I know you’re wondering why I don’t run after Owen to get a look at him. The very generous gifts Owen leaves always keep my attention and keep me from taking a peek. Plus, it makes me extra wet knowing he could be anywhere at anytime!